His commercial architectural photography has appeared on over 150 magazine covers and in 95 books, while his black and white art photography is represented in 27 museum, corporate and public institutional collections as well as many distinguished private collections. Over 120 exhibitions of his work have been shown. In addition, he was an adjunct professor at UNM for 11 years and has been contributing faculty for the last 19 years at the School of the Art Institute of Chicago. He is also currrently contributing faculty at the Santa Fe University of Art and Design and has taught at many workshops Santa Fe Photographic Workshops. 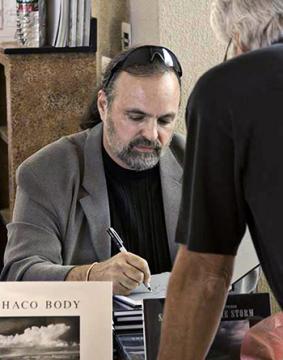 He has received many prestigious honors including a major grant from the National Endowment for the Arts, membership in the Polaroid Artist Support Group and appointment to the Freestyle Advisory Board of Photographic Professionals in Hollywood. In 2003 the editors of THROUGH THE LENS: INTERNATIONAL ARCHITECTURAL PHOTOGRAPHERS selected him as one of the leading architectural photographers in the world. His first book, CHACO BODY with poet V.B. Price about the Anasazi ruins at Chaco Canyon, has been critically acclaimed as a major contribution to regional art.

In 2005 a 30 year retrospective of his photography entitled SHELTER FROM THE STORM: THE PHOTOGRAPHS OF KIRK GITTINGS was exhibited at the Albuquerque Museum of Art and History. In conjunction, New Mexico Magazine published a monograph book by the same name.

The State Legislature of New Mexico in 2006 honored Kirk for his life's work and in 2015 the University of New Mexico recognized him as a distinguished alumni with a ZIA AWARD.

(The image is of Kirk Gittings signing a book at an opening of a solo exhibit at the Albuquerque Museum of Art and History [Photo by Patrick Carr/CARR IMAGING 2005].